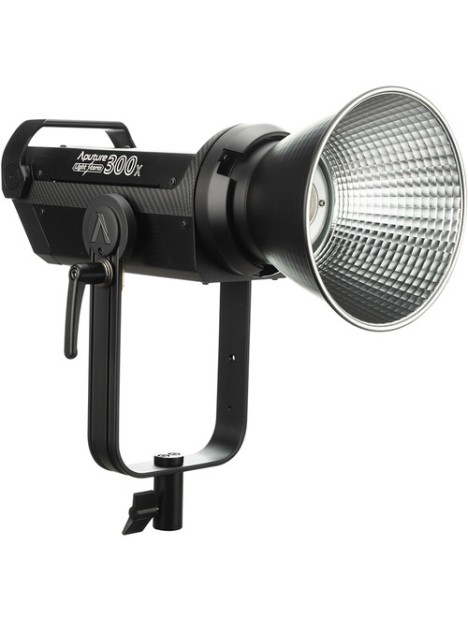 Aputure 300x hire - rental. The Aputure 300x light source is capable of using optical modifiers with lenses that further enhance its CCT flexibility, being able to generate over 56,000 lux at 1 metre with the Fresnel 2X accessory. It is the first bi-colour light compatible with Bowens Mount. The Aputure 300x features the same 360 degree adjustable locking yoke as the Aputure 300d II and the same quiet all-in-one control box and power supply design.

Like the Aputure 300d II, the Aputure 300x can also run on a single battery, up to half its maximum output. Two batteries are required for maximum power.

Aputure 300 has battery indicators. *Batteries that can withstand a continuous discharge of 15A are recommended to power the light properly.

In addition to the control wheels, the Aputure 300x can be controlled by Aputure's own 2.4G RF remote system, the professional standard DMX512, as well as the Sidus Link mobile application via Bluetooth Mesh.

The Aputure 300x joins the Sidus Link™ ecosystem, using a Bluetooth mesh network to provide users with application control for up to 100 lights, over a distance of up to 400 metres.