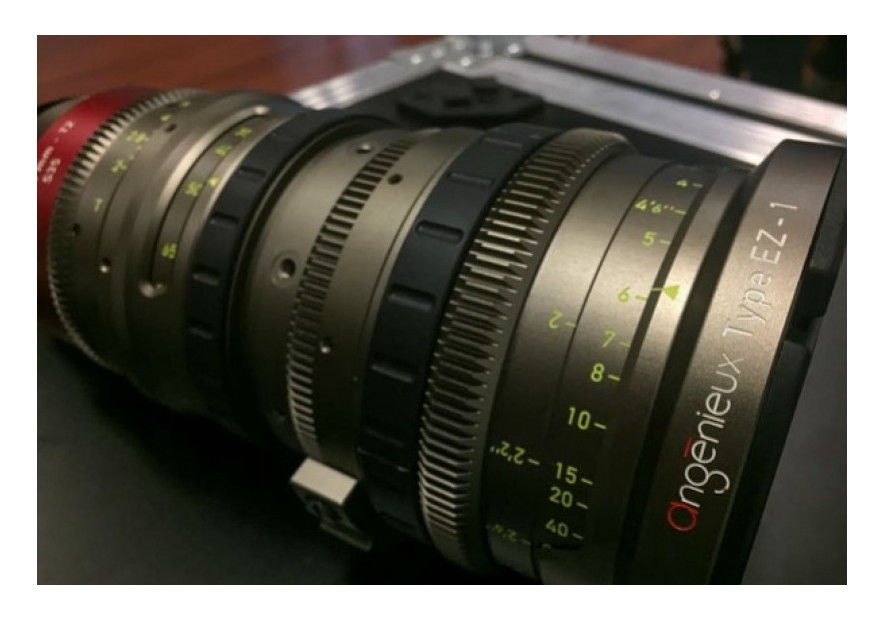 This week I’ve got the chance, thanks to the cooperation of the guys at Camaleon Rental, to have a close look to the new Angenieux EZ Type 30-90mm T/2. This is one of the new lenses of the Angenieux variable primes line up that it’s very interesting, not only for its reduced size and high speed, but also because it offers a quiet innovative feature. There is a kit available that will allow changing in a relatively easy and fast fashion the rear element of the optic changing the sensor coverage of it. By doing so we will have a zoom that can cover sensors up to Vistavision size, changing of course its focal range and loosing approximately 1.3 stops (the maximum aperture will then change to T/3). If you want my two cents, I’m not really excited by lenses that allow such kind of changes to the normal users, which is also the case of Compact Primes Lenses where it is possible to change the mount from PL to EF and vice versa without the need to send the lens over to Zeiss. I am pretty convinced that for matters as sensible as collimation, where a tenth of a millimeter can do a big difference, to rely on a screwdriver is a bit risky. On the other side I have to admit that the possibility to “upgrade” the sensor coverage is a feature that with nowadays sensors getting bigger and bigger can grant the lens a really long life.

Even though Camaleon Rental offered me to test the lens on both Alexa mini and Amira, I decided to use a Sony FS7 for the test, since this camera delivers a native 4096 resolution so I assume it is more demanding with lenses when it comes to definition. The test was shot at ISO 800, CINE EI mode with a white balance of 4300ºk. The recording settings were XAVC-I codec @ 4096x2160 25p. Focusing on the build of the lens, I liked it very much for its similarity to the Optimo Style line up and I was gratefully surprised by the fact that it is slightly lighter than the Fujinon Cabrio lenses (or it felt to me that way) while almost a full stop faster, which makes it a very interesting option for light camera configurations on documentary style shooting paired for instance with an Arri Amira. Nevertheless I need to say that the lack of a servo may be a problem in single operator-shooting. And if I had to search for flaws in the build, I miss a more exact zoom rings with focal lengths clearly marked with lines. Most of times when shooting with a variable prime you end up framing without searching for exact focal lengths, so it shouldn’t be a big deal of an issue, not to mention that if you are going to use a camera with an LDS mount you’ll be able to see the exact focal length in real time in the viewfinder and/or the video output since this lens features a full LDS system.

I decided to make 4 kind of test: definition, breathing, color deliver and flare. The definition test was made with a focus chart at the focal lengths marked on the zoom ring both wide open and at T2.8 2/3. When wide open the lens performs really good on the edge of the frames, even though a lack of definition is noticeable, while when stopped down to 2.8 2/3 the results are outstanding. As for the center of the image it shows a really impressive definition even when wide open. In fact, I had available that day also a brand new set of Cooke S4i so I decided to make a side by side comparison and, even if the Angenieux couldn’t get to the perfection of the british brand, it held up quite good opening the possibility to be used together with this set of prime lenses in a feature film without giving blending problems. Another thing that I found really surprising was the almost total lack of breathing at all focal lengths that I’ve tried, which in a zoom of this price point could be expected. I think that the great quality of the materials and the wide experience of the french brand when it comes to spherical variable prime are the key for this top notch quality. As for the color deliver, I found it to be correct, maybe a little saturated and warm, but for a more scientific conclusion it would be necessary to test the lens with the same settings on another sensor to check the chromatic response. The bokeh is quite interesting and cine-like even though when wide open the out of focus light sources have a tear-drop shape that I don’t like to much, but I have to say that this disappear if we stop down to 4 and the out of focus become very pleasant. Maybe the thing that I liked the least was how the lens handle direct light thrown to it: probably due to a real good anti flare layer, the flares lack of personality or at least this is my opinion on the matter.

To make the long story short, the lens shows a top shelf quality both optically and mechanically, with extremely smooth rings equipped with standard 0.8 gears and a very fine build. Maybe when it comes to focal range I miss something a shorter length, specially keeping in mind that if we “upgrade” the lens to full frame format the widest field of view will be a 45mm, which on Vistavision is not that bad but still a little to tight particularly for TV style productions. On the contrary I think is a very interesting option for feature style shootings, maybe paired with prime lenses or even for productions that need speed and versatility.