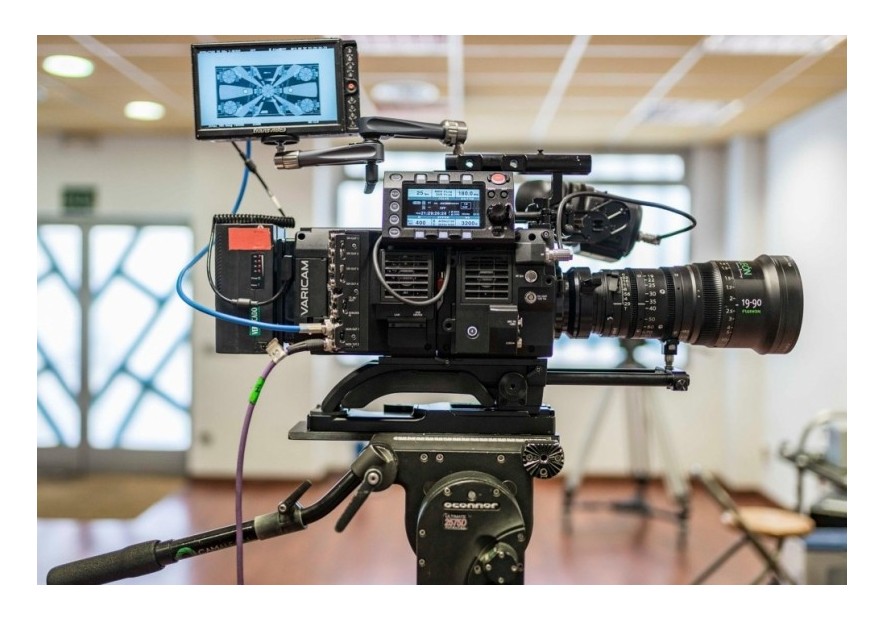 Even though the camera came out a while ago, it is a fact that as far as I can tell about the spanish film industry, it didn’t achieve the goal to enter as a valuable option when it comes to the choice of the camera for the principal photography of a project. Thanks to the collaboration of the guys at Chameleon Rental I had the chance to take a closer look to this camcorder and see how it behave from an operational point of view.  Before I start, I have to make a statement: when I actually got access to the camera, I hadn’t read almost anything about it, not even the user manual. You may thing this was because of my laziness due to the fact that it is august and very hot here in Madrid. Truth is that it was a deliberate choice. Precisely because technology progress so fast nowadays, new devices come out every six months and even if we would like to be always up to date, it is pretty impossible, specially if we are almost constantly out shooting. That’s way, to me one of the key features of a new camera is how well it is designed ergonomy and electronically wise from the point of view of a person that has no specific knowledge about that particular camera. I hope to be able to do another post, speaking more about other inner aspects of the camera such as the double native sensitivity or the different options of in camera recording.

For those of you who don’t know the technical specs of this camera, here you have the camera specifications right from the Panasonic website

The camera is an authentically and “intimately” modular camcorder, meaning that differently from other cameras and in a fashion very similar to the already pretty obsolete Alexa M (I hope Emmanuel Lubezki will never read those lines), the “eye” and the “brain” of the camera are separated. Wether it is good or not for a camera to be modular I’m a bit of the fence: on one hand ,in theory it certainly is a good feature because it means versatility. Nevertheless sometimes it turns against us, since producers for budget reason will always try to rent “just the necessary”, making the life of the first assistant way more hard.. Good news is that in this case, even though if the camera is modular, it appears impossible to separate the eye and the brain, since the eye has not any possibility to record internally so it always need to be attached to the brain, where all the camera controls are.

The mounting of the brain to the eye is very easy and similar to the mounting of modules on a Red environment, but I’m not sure that this is one hundred percent good because the contact pins of the two modules may get in touch with elements such as dust, mud, water, etc that we can easily find on exterior locations. So my advice is to mount the camera on the prep day and leave it like that (unless strictly necessary) during all the rest of the shooting, and transport the camera mounted if the flycase allows it.

The mount of the EVF support is also very easy, but again I do see some little fail such as the fact that is quite little, so it doesn’t allow to separate the EVF from the camera body, which for “left-eyed” operators could turn pretty annoying. Plus, the part that allows to rotate the EVF on his axis has no knobs or screw to tight or loose when you want to move the loupe, which is something that doesn’t seems to me “time-proof”. The EVF itself looks pretty good, bright and sharp, quite similar to his array homologue. It actually has an interesting feature aside of the dioprty adjustment, which with a loupe allows to “zoom” in or out the image of the EVF.

When putting the camera on the fluid head, I found out that Panasonic neither had followed the lead of Arri when designing his cinema camera: all, or at least all the most important settings are placed on the left side of the camera instead that on the “dumb side” as the Alexa SXT for instance. Which means that it is quite difficult to change the camera settings without bothering the camera operator or whoever is watching the frame through the EVF. This issue can be partially fixed by the fact that the display with all the buttons around him can be detached as a module from the left side and with the help of a special adaptor that includes a cable of approximately 1 meter, placed on a tripod or on the dumb side of the camera itself. I say “partially fixed” because some important controls such as the ND filters or the user assignable buttons are not included in the removable display.

The menu “reminds me” of the one by Arri, even though unfortunately has some issue. Even though it is clear, the way in which the concept are organized is a bit weird to me and I was struggling a bit to get to settings as important as the resolution or the video output configuration. Nevertheless I need to say that after a reasonable while of learning, one can move around the menu easily. The buttons have not the super fast response of an Alexa and there is, in my understanding a major issue that is that you need to reboot the camera overtime you change the resolution settings. The operation will take us approximately 30 seconds, which can seem a very short time but if you are shooting a sunset feels like eternity. Good news is that the camera offers practically the same maximum framerate at almost all the resolutions and codec available (except the 4K INTRA4444 which only allows 25 fps) so a change of resolution or codec shouldn’t be happening has often as on a Red or Arri.

Another good feature on this matter is that, even though the camera needs approximately 30 seconds to be able to shoot, the EVF delivers image signal practically from the moment that you move the switch on the ON position, giving the possibility to the operator to start framing straight away.

To make the long story short, it definitely looks like an interesting camera, I’m longing to see how it performs on a real set.