The L10-C Fresnel LED, is the largest source in the L-Series line. Its construction combines aluminum and thermoplastics, achieving robustness and light weight. L10-C fresnel led source produces a powerful light that successfully envelops the object from a long distance.

The ARRI L10-C fresnel led source is the latest incorporated into the film market of the L-Series line. Despite being the heaviest, it is the most powerful in light intensity. Its robustness is compensated by its lightweight since it is made of aluminium and thermoplastic material. With the possibility of connecting to alternating current voltage 100V - 250V, 50 - 60Hz. Unavailability of battery power. With a consumption of only 400W and 510W maximum, it is consolidated as a source of great energy efficiency. The control panel can be operated both by DMX and remotely wireless by RDM command.

The ARRI L10-C fresnel led source allows you to control a color temperature range between 2800K and 10000K, and can be varied continuously and quickly without the presence of flickering. L10-C fresnel led source provides control over the hue (HUE angle) and saturation of the chosen color. It also gives the possibility of Green - Magenta color correction.

ARRI L10-C fresnel led source provides more than twice the brightness of its predecessor the ARRI L7-C fresnel led source. With a dimmer range of 0% to 100%, it allows you to change the light intensity continuously without the existence of flickering. It has a variable beam of light between 15 and 50 degrees. With a lens diameter of 274mm. The photometry it achieves depends on the color temperature chosen, the light beam and the distance to the subject: 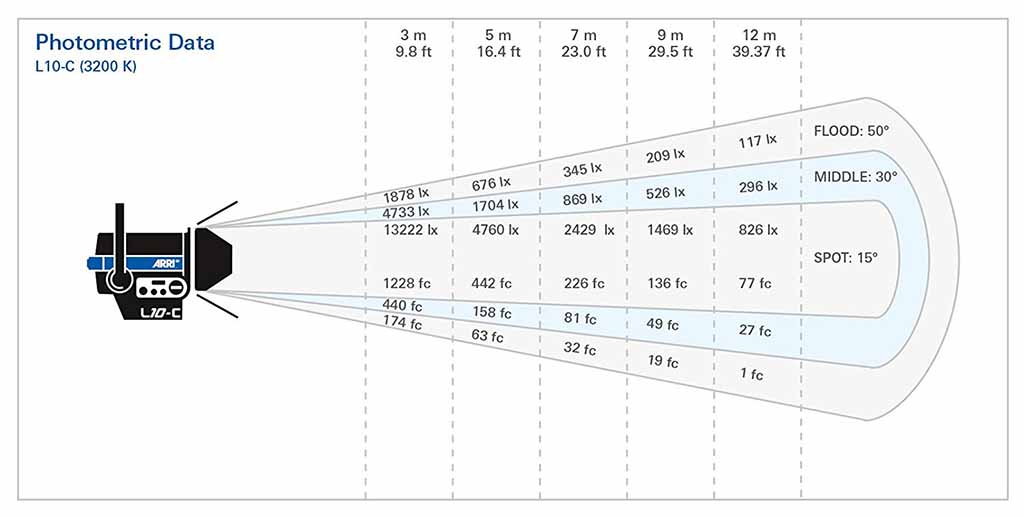 The entire series of ARRI L led sources are available in Camaleon: L5, L7 and L10-C.