The Fresnel LED ARRI L5-C was a great addition to the L-Series family. It works very well with your partner L7. The Fresnel LED L5 is more compact and lightweight. It has the same qualities as a tungsten Fresnel but with the advantage of controlling a wide range of color temperature and allowing color correction adjustments, typical of a high-end LED.

ARRI began launching the L-Series line with the Fresnel LED 7-C in 2011 and nowadays they continue to improve this range. The Fresnel LED L5-C was incorporated as an alternative in search of versatility and lightness in the shootings, not exceeding 7Kg.

The Fresnel L5-C source can be connected by alternating current by TRUE1 with a power range of 90ACV to 250VAC, with a frequency of 50 / 60Hz. It generates a consumption of no more than 115W. L5-c can also be powered by batteries connected to a V-Lock battery adapter with XLR-4pin cable, with a voltage range of 23V-36V. Its control can be done remotely by RDM commands or by controller to 5-pin DMX connection.

The L5-c source provides a range of CCT or color temperature control from 2800K to 10000K of continuous variability. It has a Green-Magenta color correction control that can be adjusted continuously, it allows you to make adjustments to the tone, as well as to vary the saturation of the chosen color. It achieves an average CRI of 94% and a light consistency index on TV (TLCI) of 90%. The light emitted by L5-c, L7 and L10 is calibrated for optimal color reproduction in digital cinema cameras.

With the L5-c source you can continuously dim the light intensity in a range between 0% and 100%. The ARRI Fresnel LED L5-C projector is free of flickering, does not suffer flickering when you change intensity or temperature. L5-c produces a beam of light of 14º to 50º variable, obtaining the quality of a focusable fresnel.

The Arri Fresnel LED L5-c source is a lighting device designed for both exteriors and studios, withstanding extreme temperatures, from -20ºC to + 45ºC.

In an increasingly ecological film and TV industry, LED accessories are getting popularity and ARRI with its L5-c series are the market leaders. The l5-c series improve quality, versatility and color control, reducing costs.

The L5-c sources reduce electricity consumption. The LED light motor has long life, up to 200 times more than a tungsten lamp. 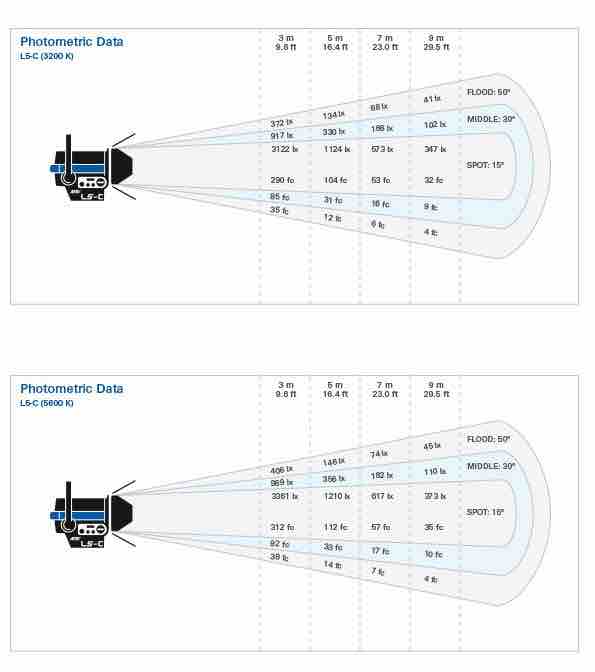 * The entire series of ARRI L led sources are available in Camaleon: L5, L7 and L10.